The Gallery of the Town Museum was open in 1977 in the building of the First National Savings Bank. Several valuable foundations can be seen there – from the collection of old master pieces to graphic prints and paintings by leading Croatian and Podravina painters. Every year, the Gallery organizes more than ten exhibitions of the most important contemporary Croatian visual artists, with an emphasis on the authors who have been linked with this town or area by their birth, work or artistic endeavor. 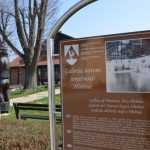 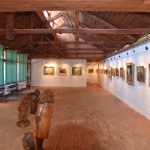 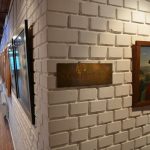 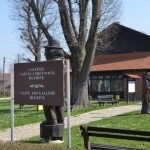 In Hlebine, the village where the world famous “Hlebine School” of naïve art and sculpture was first established, a Gallery was built in 1968, as a home to the permanent exhibition of the paintings presented to the Gallery by Ivan Generalić himself. There are also regular exhibitions of distinguished indigenous painters and sculptors, the followers of the “Hlebine School”. In the atrium of the local school, near the Gallery, there is a fresco by Ivan Generalić, one of his rare early works made in that technique. The visit to the school building is also to be announced at the Gallery.

Established in 1995, contains the most valuable works by the author that had been exhibited in many galleries round the world.

THE HOUSEHOLD OF JOSIP GENERALIĆ

The house where Ivan Generalić (1914-1992) lived was converted into a museum with items and documents related to his artistic work and family life with his wife Anka and son Josip. This is a place where pictures, drawings, graphics and other works are exhibited, too, with some masterpieces of the world naive art among them like „Deer Wedding“ and „A Horse With a Horn“.

Established in 1995, contains the most valuable works by the author that had been exhibited in many galleries round the world.

THE STUDIO OF JOSIP GENERALIĆ

The exhibition studio with retrospective display presents author’s all artistic phases – from the earliest works to his greatest achievements. In the gallery area of the studio other author’s works have been exhibited too.

This house has been furnished with rare preserved items which had formerly been used by people in Podravina in their everyday lives, while farming, working in the fields, vineyards and orchards. There are also some younger author’s paintings here, those belonging to the third generation of “Hlebine School”. Gallery sells paintings, drawings, reprints, picture postcards, books and souvenirs. Catering is also provided there.

The building dating from the early 20th century which was previously used as the local school, has been converted into a gallery area. A permanent display of about twenty works painted by the members of the Gola Association in naïve manner, among whom the most famous are Ivan Večenaj, Martin Mehkek, Biserka Zlatar-Milinković, Franjo Vujčec etc. The Gallery organizes group exhibitions for its members every year, as well as individual authors’ shows for painters coming from places other than Gola. Visitor can buy occasional souvenirs. 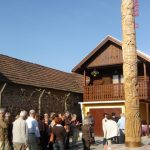 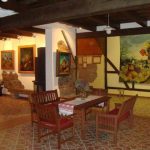 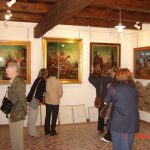 Adjoining Ivan Večenaj’s studio, there is an exhibition area with about 30 works which present an outline of the painter’s creative work since he first started painting until now. The exhibited items here are also documents and books written by Ivan Večenaj who turned the history of the Drava region into fiction, together with describe especially valuable local customs for the people’s lives in Podravina. The Gallery sells re-prints, serigraphs, graphics, books and picture postcards. At the birth place of Ivan Večenaj historic antiquities with sacral pictures are exhibited with sculptures of originally national creation, and ethnological valuables of the Drava region.

The fortification from the 13th century has been turned into the Old Castle Gallery with the donation of Ivan Lacković Croata containing around hundred works of Vladimir Becić, Tomislav Krizman, Vlaho Bukovac, Oton Gliha, Oskar Herman, Oton Iveković, Krsto Hegedušić and other famous painters. There are also works by painters from this part of the country, and the Gallery regularly prepares exhibitions for Christmas and the Picoki legend Days taking place in late June. The visitors can buy graphics, serigraphs, artistic portfolios, books, picture postcards.

“THE ART CIRCLE OF MOLVE” – THE GALLERY

“Molve Artistic Circle” encompasses about thirty painters and sculptors, all belonging to the Podravina naïve art, who managed to find their places in that artistic manner which has been confirmed in exhibitions in Croatia and abroad. The Gallery, open in 1998, permanently exhibits around 30 works of the members of the “Molve Artistic Circle”, together with occasional individual and group exhibitions of other authors all year round.

A collection of about thirty paintings gives an insight into the entire painting work of Josip Cugovčan. Except the paintings, ethnographic pearls of Podravina are also presented, which have been collected by the author for years, the most numerous being costumes and items for everyday use and related to neglected Christmas, Easter and other holiday customs on nearby villages. As a passionate researcher of history of this region, Josip Cugovčan owns his own archeologic collection of old jewelry, tools and dishes, as well as remains of pre-historic animals.

In Batinske, a village near Kalinovac, the local school building has been converted into the gallery paintings by Croatian and international authors, donated by Ivan Lacković Croata as a gift to his birth place. His own works of art exhibited there bear witness to his rich and creative artistic life. The gallery is also the home of the sculptures by the local sculptor Ljubica Matulec, who, for years, lived and worked in Germany. A former teacher and poet from Kalinovac, Petar Grgec, has his heritage on display in a part of the gallery too.

Within the family house and studio in Gornja Šuma, not far from Molve where he has been painting since his early childhood, the painter Mijo Kovačić arranged a gallery. His own paintings are exhibited there, mainly those made in recent years, with some capital works of art from his earlier periods among them too. Those are mostly oil on glass, but one can also find some drawings on paper.

In Bakovčice, village near Koprivnica, situated on the slopes of picturesque wine-growing hills of Bilogora, a painter and sculptor Tomislav Balažin arranged his studio with the gallery where one can see about sixty paintings, thirty sculptures in wood and other materials, as well as various reliefs. The entire object has, as a matter of fact, been converted into an exhibition area, furnished with carved furniture of real usable value.

Within the Town Museum the Town Art Gallery is also open, offering about ten exhibitions a year – ranging from paintings and sculptures to art photography. The gallery owns their own holdings of about 300 pieces of art by distinguished Croatian authors, especially those who lived and worked in Križevci and nearby places. Among them the most prominent are Marijan Detoni, Oton Iveković, Josip Friščić, Marijan Kolesar and others.

The collection of sculptures by Ivan Sabolić (1921-1986) is set in the former military office building dating from the Croatian Military Boarder times and built in 1780. Ivan Sabolić donated this collection to his birth place of Peteranec, where he spent his childhood and where he carved his first works by his father’s side, who himself was a self-educated violin maker. This collection contains about seventy of his sculptures made in plaster of Paris, a few casts as well as around ten drawings and sketches. In addition, there are Ivan Lacković Croata’s drawings related to the poetic works of Fran Galović from Peteranec displayed there.

About fifty works of art have been exhibited in the painter Josip Turković’s (1936-1982) family home, presenting a uniquely rich and creative range of artistic work of this painter who managed to resist the influences of the naive art and who painted Podravina in his own individual manner. Twenty or so individual exhibitions speak for themselves about this author and his paintings which attract numerous admirers to Virje to this very day. Except for paintings, drawings and illustrations especially of books that Josip Turković was also famous for, one can see also his unfinished works. Picture postcards are available on sale.

In the Memorial Hall „Vladimir Jagarinec“ there is a gallery with about eighty pictures. These works were made in art colonies in Novo Virje, encompassing authors from all around Croatia, and the exhibition collection is updated with new works of art every year. Individual authors’ shows are also organized. The art heritage of a former teacher and painter Vladimir Jagarinec is displayed within the gallery area as well. Marijan Jakubin’s frescos decorate the local church of St. Joseph and the graveyard chapel. Souvenirs, books and picture postcards can be purchased there.

THE BIBLICAL GARDEN OF PEACE

In the 1st world „Biblical Garden of Peace“ 33 wooden sculptures of the characters from the Old and New Testament are exhibited, made by famous Croatian sculptors. The sculptures are located in the local primary school yard and are available to visitors’ viewing all day long.

Life-size sculptures shaped in oak, placed in the central park of the village, present those individuals whose lives are linked to the countryside, water and the praise of nature. They are exhibited in the symbolic cycle of water. The Ecological Garden of Peace has been based on the idea of Milorad Kovačević, a Koprivnica peacemaker, who managed to bring together the works of about twenty sculptors from all over Croatia. It was opened on the occasion of the International Peace Day on 21st of September 2003.

Locations “Easter egg from the heart”

Exhibition of large eggs “Towards Easter” in Koprivnica